Our national program started in 2010 with a goal of developing and teaching student athletes the fundamentals of football.  We strive to meet this goal with a variety of training techniques from basic football drills to strategic game day preparation.  We have competed and been successful in all aspects of National Football whether it was Pop Warner, UYFL or AYF.  We take pride in not only the development of our athletes but also their safety which is why we participate in an annual equipment reconditioning program to ensure all of our athletes are outfitted with safe equipment.  Listed below are some of our success along the way and more about our program.

This video highlights some of our 2021 accomplishments and also showcases some of our additional achievements as an organization since our inception. The Hokies launched in 2017 with football and cheer, later adding track and basketball.

After a long season our equipment is sent off to the original equipment manufacturer for reconditioning. Through the recon process the helmet is disassembled, inspected, tested for safety, and cleaned.

Birds of a Feather

Our original wings as a organization was comprised of a hawk's feathers. In 2010 we started out with Pop Warner as the Hampton Hawkeyes. Being the first national organization in Hampton we looked to create new traditions and experiences for student athletes on the peninsula.

The registration includes but is not limited to:

REGISTER FOR FALL ONLY 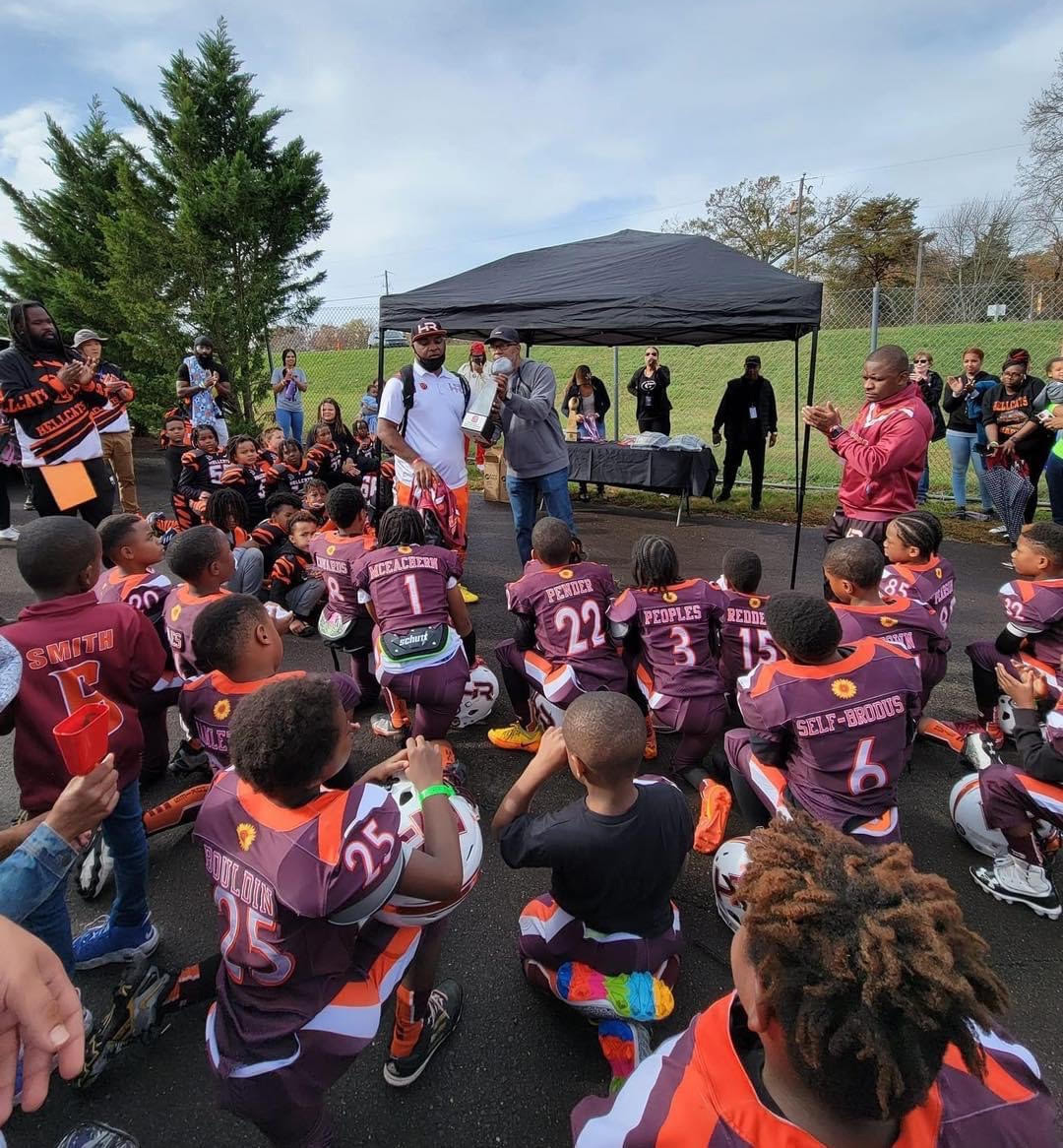 ASSUMPTION OF RISK / WAIVER OF LIABILITY / INDEMNIFICATION AGREEMENT
In consideration of being allowed to participate on behalf of Hampton Roads Youth Sports Association - Hampton Roads Hokies athletic program and related events and activities, the undersigned acknowledges, appreciates, and agrees that:

I HAVE READ THIS RELEASE OF LIABILITY AND ASSUMPTION OF RISK AGREEMENT, FULLY UNDERSTAND ITS TERMS, UNDERSTAND THAT I HAVE GIVEN UP SUBSTANTIAL RIGHTS BY SIGNING IT, AND SIGN IT FREELY AND VOLUNTARILY WITHOUT ANY INDUCEMENT.

This is to certify that I, as parent/guardian, with legal responsibility for this participant, have read and explained the provisions in this waiver/release to my child/ward including the risks of presence and participation and his/her personal responsibilities for adhering to the rules and regulations for protection against communicable diseases. Furthermore, my child/ward understands and accepts these risks and responsibilities. I for myself, my spouse, and child/ward do consent and agree to his/her release provided above for all the Releasees and myself, my spouse, and child/ward do release and agree to indemnify and hold harmless the Releasees for any and all liabilities incident to my minor child’s/ward’s presence or participation in these activities as provided above, EVEN IF ARISING FROM THEIR NEGLIGENCE, to the fullest extent provided by law.

I acknowledge that I am fully aware of the potential dangers of participation in any sport and I fully understand that participation in football, cheerleading, dance and/or step may result in SERIOUS INJURIES, PARALYSIS, PERMANANET DISABILITY AND/OR DEATH. Furthermore, I fully acknowledge and understand that protective equipment does not prevent all participant injuries. I, the parent/guardian of the named participant, do hereby give my approval for my child/ward to participate, and further assert that I have verified with my child/wards physician, and in my opinion, my child/ward is physically fit and can participate without limitation in any and all Local, Regional, National, League/Conference, Association and team/squad activities, including transportation to and from the activities by a licensed driver.

We acknowledge, AND WE understand the risks involved in my CHILD/WARD, my playing FOOTBALL, which is a collision sport; the NOCSAE committee has adopted the following warning to be read by, and signed by, both the parent/guardian and participant. DO NOT USE THIS HELMET TO BUTT, RAM OR SPEAR AN OPPOSING PLAYER, THIS IS IN VIOLATION OF FOOTBALL RULES AND CAN RESULT IN SEVERE HEAD, BRAIN OR NECK INJURY, PARALYSIS OR DEATH AND POSSIBLE INJURY TO YOUR OPPONENT, THERE IS A RISK THAT THESE INJURIES MAY ALSO OCCUR AS A RESULT OF AN ACCIDENTAL CONTACT WITHOUT INTENT TO BUTT, RAM OR SPEAR, NO HELMET CAN PREVENT ALL SUCH INJURIES.

I have chosen to participate in an a sport where injuries may occur and I do understand that it is my responsibility to report all of my injuries and illnesses or suspected injuries and illnesses to the organization’s staff, including but not limited to: coaches, team physicians, and athletic training staff. I further understand and recognize that my health and safety is the most important thing and without disclosing all injuries and or illnesses, it can not be properly determined if you are in the physical condition necessary to participate. I understand that I must provide a full and accurate medical history including any symptoms, health complaints and any prior injuries and/or disabilities I have experienced before, during or after athletic activities.

By signing below, I acknowledge:

Based on the incidence of concussion as published by the CDC football and cheer, among other sports, have been identified as high risk for concussion. I represent and certify that I and my parent/guardian have read the entirety of this document and fully understand the contents, consequences and implications of signing this document and agree to be bound by this document.

I acknowledge that any items deemed rentals are the property of (HRYSA) and that I am obligated to return it at the conclusion of the participant's season or when requested to do so. I acknowledge that if I fail to return the rentals described herein or if the rental is lost, stolen or damaged, except for normal wear and tear, that I shall be responsible to pay to the HRYSA the replacement cost in its entirety, including collection cost (ex. Court cost, Postage, etc).

The Participant shall not make any alterations, additions, modifications, or improvements to the rentals and shall use it only for the purpose and in the manner for which it was intended by the manufacturer unless given written consent by a HRYSA board member or director. Violation of this rule may result in termination of registration.  The Participant may not permit the rentals to be used by another party or at a different location without the expressed written consent of HRYSA. For all participants using their own approved equipment this section is not applicable .

I/We give permission to have my/our child's picture, video or any media on the association's marketing material.

Hampton Roads Hokies will not tolerate verbal abuse of its volunteer coaches from any Fan, Parent or Spectator.

Fans, as well as the players and coaches, are expected to abide by a code of conduct at all Hokies Events. While 99% of the adults in the program will abide by this code without being told, this code is being published to protect the children and volunteers (which includes all coaches and board members) from the 1%.

Fans will abide by a Code of Conduct which includes the provisions which follow. If any of these rules are broken, Hampton Roads Hokies shall have the authority to impose a penalty.
Fans shall:

Any parent or fan who violates the code of conduct risks the further participation of the child in the program. The procedure is as follows:

CONDUCT OF ALL PLAYERS - PARENTS

All players are guaranteed minimum plays in each Regular Season or Playoff game. Everything beyond that must be earned in the opinion of the coaching staff whose decisions are final.

Athlete’s Code
I will: emphasis the ideals of sportsmanship, ethical conduct and fair play. Show courtesy to my opponents and officials. Recognize athletic contests are serious educational endeavors. Give complete allegiance to my coaches who are the instructional authority for my team. Discourage fans, fellow players and parents from undercutting my coach’s authority.

I will not: Use profanity or talk “trash” before, during or after any game. Use drugs, alcohol, or tobacco. Criticize my teammates. Act in any way that may incite spectators.

Parent’s Code
I will: Support my child’s team/squad and teach the value of commitment to the team/squad - emphasis the ideals of sportsmanship, ethical conduct and fair play. Help my child and the Hampton Roads Hokies make athletic contests a positive educational experiences. Show courtesy to opponents and officials. Direct constructive criticism of my child’s athletic program to the athletic director or association officials and work toward a positive result for all concerned.

I will not: Criticize officials, direct abuse or profane language toward them, or otherwise subvert their authority. Undermine, in work or deed, the authority of the coach or administration. Intrude onto the field, stand on the sideline, or yell from the bleachers at or to the coaches, referees or administration.

Our Association has several different sports and programs we facilitate throughout the year. If you would like to join us please Click Here to be receive information.

Proudly made by Done Wright Design